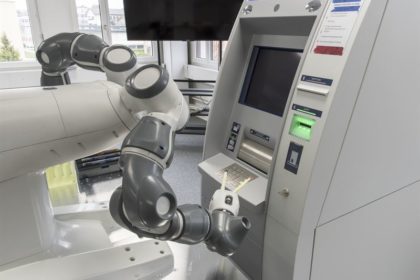 It takes around thirty seconds for a person to withdraw money from an Automated Teller Machine (ATM). These cash-dispensing and receiving devices are found “around the corner” in every city of the world and have made banking simple and intuitive.

To make these financial transactions safe and secure, an ATM receives new software versions or patches at least every six months, but before any new ATM software is released it needs to undergo thorough testing to ensure that it complies with strict global and local specifications for reliability, usability and security.

The testing is so exhaustive that YuMi® is programmed to deliberately make human errors, such as inserting money bound with a paperclip, to ensure the software can deal with a range of issues.

The prototype dual-armed YuMi®, developed at the Abrantix global headquarters in Switzerland, is a game-changer for ATM software testers. The YuMi® system replaces the traditional manual testing environment, that not only required testers to spend hundreds of hours in front of an ATM, but also ran the risk of human error.

Automation has increased the speed of the software development process. During the day, developers create new ATM software features that are then tested automatically by the YuMi® robot at night. Feedback is checked the following day, which frees up time for testers to perform more meaningful tasks.

“Previously, the test cycles could become bottle necks and even risks in the critical path of a release. With the new YuMi®-based solution, this is much more under control and employees can now focus on improving test cases and procedures or even develop new software features, while YuMi® is testing the ATMs,” said Abrantix CEO Daniel Eckstein.

“At Diebold Nixdorf, we believe this testing automation environment created by the innovation leaders Abrantix and ABB, combined with our own extensive knowledge in innovative ATM software development and testing, has a fantastic potential to massively improve test efficiency and software quality in hundreds of our customers’ test labs around the world,” said Richard Schlauri, MD of Diebold Nixdorf, Switzerland.

Marc-Andre Zingg, ABB Robotics Business Line Manager in Switzerland, said: “The ATM testing system developed by Abrantix is exactly the sort of precise, collaborative process that our YuMi® robot was designed for. With YuMi®, Abrantix is not only assured that the robot will safely share tasks with their employees, but their skilled software developers now have more time to devote to other more valuable tasks, while YuMi® works away in the background on repetitive, but highly important tests, 24 hours a day.”

ABB Robotics is a pioneer in industrial and collaborative robots and advanced digital services. As one of the world’s leading robotics suppliers, we are active in 53 countries and over 100 locations and have shipped over 400,000 robot solutions for a diverse range of industries and applications. We help our customers to improve flexibility, efficiency, safety and reliability, while moving towards the connected and collaborative factory of the future. www.abb.com/robotics

Meet other technologies investigated by ABB 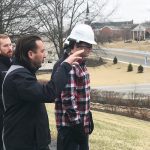 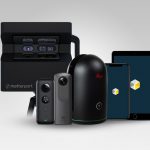 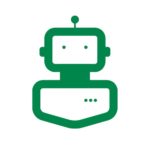